The Department of Defense (DoD) held its third DoD Lab Day on Thursday, April 25, 2019, in the Pentagon Courtyard in Arlington, VA.

The Department of Defense (DoD) held its third DoD Lab Day on Thursday, April 25, 2019, in the Pentagon Courtyard in Arlington, VA.

The 2019 DoD Lab Day, a biennial event, showcased the innovative work performed by the scientists and engineers within the Defense Laboratory Enterprise (DLE), which includes Defense laboratories, warfare centers, and engineering centers across the world. The event presented an opportunity for the labs to display the groundbreaking work developed throughout the DoD that benefit the warfighter.

There was great representation across the Components with a broad spectrum of research and development that directly contribute to the lethality of the warfighter and also play a critical role in maintaining the Nation’s economic future. There were over 100 exhibits at this year’s event that focused on the Department’s modernization priorities, including: hypersonics, directed energy; fully networked command, control and communications; space; cyber; machine learning/artificial intelligence; missile defense; quantum science; microelectronics; nuclear modernization; autonomy; and biotechnology.

Some technologies highlighted at the event included:

The U.S. Army Combat Capabilities Development Command is working on an Extended Range Cannon Artillery (ERCA). ERCA will enable the U.S. Army to meet long-range precision fires modernization goals by developing a system that doubles the range and rate of fire of existing cannon artillery.

Hypersonic flight research at Air Force Research Laboratory will provide the Air Force with an affordable and responsive hypersonic weapons system. The ability to conduct research at relevant flight conditions helps the Air Force reduce risk of failure prior to integrating into prototype and operational hypersonic systems.

The U.S. Army Institute of Surgical Research’s Coagulation and Blood Research Department focuses on the most lethal threat to battlefield wounded – blood loss. The research aims to deliver blood product storage and treatment of blood-related disorders, thus ensuring that an adequate supply of safe and effective blood products and cellular therapies are readily available to support the care of trauma patients in military operations. 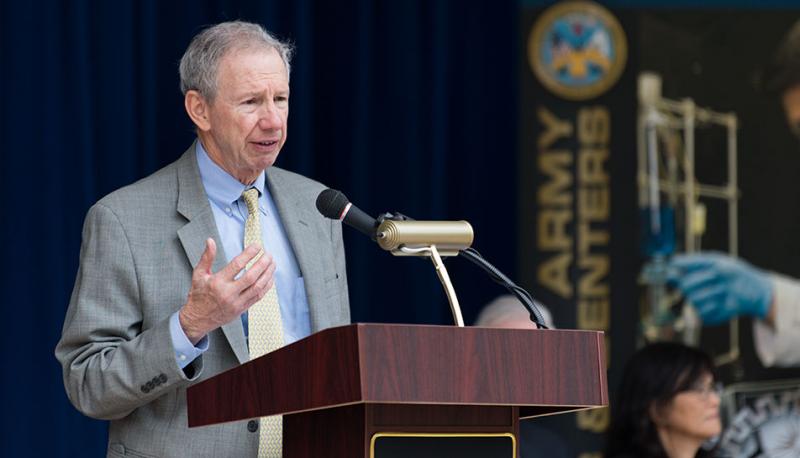 Dr. Michael D. Griffin, the Under Secretary of Defense for Research and Engineering; Photo by the Army Multimedia & Visual Information Directorate

The keynote speaker for the opening ceremony of the event was Dr. Michael D. Griffin, Under Secretary of Defense for Research and Engineering, who discussed the Department-wide focus on identifying and investing in unique capabilities to sustain and advance the Department’s military superiority for the 21st century. He emphasized the importance of the DLE and its role to serve as the voice of technical truth and ability to achieve technical excellence to help warfighters on the front lines.

The winner of the Applied Research for the Advancement of Science and Technology Priorities (ARAP) Program was also announced during the opening ceremony. The ARAP Program is an annual award that funds a three-year project that fosters Joint-Service research, facilitates concept exploration efforts, and strengthens in-house laboratory research efforts and workforce. The 2019 winner of the ARAP Program was the Topologically Enabled Devices Program - an Army, Navy, and Air Force laboratory joint effort that will exploit basic research advances in topological materials to establish a path towards DoD dominance in microelectronics.

The core technical engine of the Department is its science and engineering community. The exhibitors at DoD Lab Day represented the foundation that sustains the DoD’s ability to support and field military critical technology with no commercial equivalent. The research and development showcased continues to help the Department make dramatic improvement to our Nation's military capability.